Mirosława Laszuk, Dana Šramková
Challenges of Customs Law during the Paradigm of “Facility and Security” in International Trade

Abstract: Changing conditions within international trade as well as the implementation of the facilitation and security paradigm have significantly impacted the structure of customs law. Both the SAFE Framework as well as the Trade Facilitation Agreement had indicated the need to maintain a balance between regulations introducing simplifications and those ensuring safety and security. One example of such a solution is the institution of the authorised economic operator (AEO), which grants those entities opportunities to take advantage of a number of simplifications, such as the filing of the simplified customs declaration, making entries in a registry, or performing self-assessments, but, at the same time, maintains the requirement of safety and security (through a detailed audit of the enterprise before AEO certification). However, by allowing authorised economic operators to perform self-assessment in respect of goods that have entered into the customs territory of the European Union and are to be released for trade, EU legislators have created significant challenges concerning the realm of safety and security, especially concerning the institution that is the most important within that area – that of customs controls. Despite all this, its importance to safety and security remains distinctive and may be seen in the emergence of new types of customs controls which concern only this particular sphere.

Abstract: In all matters regarding climate change, the modern world presents complex challenges which highlight how investments in infrastructure have as of yet been inconclusive. The emission percentages calculated by relevant studies demonstrate the need for long-term investments in infrastructures, to ultimately reduce the impact on the environment and our health. To this end, in alignment with the principles expressed in the Paris Agreement – reducing global warming and incentivising a zero-emission transportation system – and the Sustainable Development Goals (SDGs), these new infrastructures will require a structural change that can be guaranteed by multilateral development banks (MDBs), given their nature, especially within developing countries. MDBs play an important role in supporting local governments, on the one hand creating a prosperous environment for sustainable infrastructures and, on the other, providing innovative financial instruments that could increase the financial sector’s participation. In this paper, after a brief excursus on the Paris Agreement’s role in the global climatic crisis, there will be an evaluation of the relations between MDBs and climate finance, with a focus on green bonds.

Vincenzo Iaia
The Strengthening Liaison between Data Protection, Antitrust and Consumer Law in the German and Italian Big Data-Driven Economies

Abstract: Nowadays, personal data represent a strategic asset for companies as they can significantly influence their market position. Indeed, the issues arising from the management of large amounts of data (so-called big data) are not only relevant for data protection authorities, since this practice has also induced the intervention of competition and consumer protection authorities. The digital economy has enhanced new forms of abuses of dominant position and unfair practices, which can be performed via the handling of big data. This paper starts by analysing the German antitrust authority vs Facebook decision in which the big-tech platform was sanctioned for having performed an exploitative abuse of dominant position through its data management strategy. Then, it focuses on the Italian antitrust authority vs WhatsApp decision, where WhatsApp was deemed responsible for unfair and aggressive practices aimed at extracting users’ consent for data-sharing purposes. These two remarkable cases will be compared and further discussed, outlining the need to rethink the strengthening interplay between data protection, competition and consumer law, as it will entail a closer contact of the respective authorities to ensure the sustainability of digital markets.

Abstract: Causa is a subjective motive that determines the content of the obligation or material interest, which encourages the party to the trade to enter into an obligation taking on the associated burdens. In the countries of continental (mainland) Europe that belong to the Romano-Germanic law system, such as Germany, France, and Italy, the goal (objective) of the parties to the trade, causa, is legally significant. In the theory of the Civil law of the Romano-Germanic system, there is a general principle – any obligation arises for some purpose, which is called the basis of obligation. Causa is an individual interest that meets the requirements of the legal system. France was one of the last European countries that did not recognise the contingency theory as a basis for regulating the binding force of a contract. In practice, the courts have faced criticism of the concept of causation from both doctrine and law enforcement practice. In 2016, there was a significant reform of the French law of obligations. Legal science, undeservedly, did not attach due importance to one of the most noticeable innovations within the framework of the mentioned reform – the abolition of the concept of “causa” (reason, basis) of the contract, which until recently was one of the most original features of the French law and originated from Roman law, which was fixed in the Napoleonic Code. In this article, the theoretical provisions for the abolition of the concept of causa in French civil law, within the framework of the reform of the Civil Code, were investigated, and the corresponding conclusions were drawn.

Dorota Lis-Staranowicz, Róbert Jáger
Polish, and Slovak, Women in the European Parliament: an Analysis of the Results of the Election Held in May 2019

Abstract: The objective of our paper is to analyse the political activity of Polish, and Slovak, women in EP elections; we aim to determine, among other things: whether gender quotas are a decisive factor for women’s electoral success, or do other factors result in an increase/decrease in the number of female candidates and the number of women MEPs? What are the particular characteristics of women representing Poland, and Slovakia, in the EP? What was their path to the EP? Which (conservative, liberal) parties are more willing to put women forward in EP elections? Poland introduced the so- called gender quotas into the electoral system, while Slovakia does not have such legal solutions in place. However, when comparing Slovakia to the situation in Poland, it can be stated that although there is a system of election quotas in Poland, its practical implementation may be purely theoretical. In percentage terms, the number of Slovak women elected to the European Parliament (except 2019) was significantly higher than in Poland, even though there is no quota system in the Slovak Republic. The success of Polish, and Slovak, women in the elections to the EP of the 9th term is the result of many factors, which include so-called electoral engineering (quotas, gender balance, first and second places on lists), electoral strategy of a party, but above all, political and social activity of the women themselves. We consider the last factor to be determinant in this respect.

Abstract: The universality of the right to petition, in terms of both the broad specification of its subject matter and the group of entities entitled to petition, as well as the specification of the accessible formal requirements for filing petitions, is a challenge at the level of both lawmaking and applying the law. The need arises not only to ensure that an extensive group of entities has the opportunity to file a petition, but also to provide a guarantee that the petition will be processed and considered properly. The subject matter of this article is the analysis of the Polish legal regulations on this, as well as a review of the established practices of filing petitions with the Sejm and the Senate, as well as their comparison with the solutions applied in other countries. The findings indicate that this is a tool of a civil society commonly used in the European Union Member States. It should also be noted that the Polish solutions, as well as the practice of their application, are seen to be particularly targeted at increasing social activity and enabling the use of the potential that is inherent in the citizens, groups of citizens and all forms in which they can interact with each other.

Keywords: civil society, entities with the capacity to file petitions, formal requirements of petitions, participatory democracy, subject matter of the petition, the right to petition

Abstract: The article deals with the challenges resulting from financialisation, in which we observe an increasing impact of the financial sphere in man’s everyday life. It also considers the effect of this process on the functioning of societies and concludes that the process of creating and applying financial market law must be redefined and human rights issues taken into account. In addition to the activity of the UN and the European Union in promoting the concept of business and human rights, the experiences of recent years show that combining human rights with financial market regulation is possible. To achieve this, however, many actors must be involved and a specific understanding of human rights and values must be adopted, and their protection should constitute the core of the legislator’s activity.

Abstract: The aim of the article is to examine the structures of electronic bills of exchange. It also includes an analysis of the proposed shape of an electronic bill of exchange prepared for the needs of the Polish legal system by the Working Group for distributed registers and blockchain, operating at the Ministry of Digitalization. The comparative and dogmatic methods were used for the analysis. According to the hypothesis put forward by the author, the introduction of the construction of an electronic bill of exchange to the Polish and foreign legal systems is necessary to maintain the functioning and importance of bills of exchange among securities that are traded in the economy. However, the implementation of an electronic promissory note requires appropriate legislative changes, as the current legal status does not allow for an unambiguous statement of the possibility of issuing them.

Abstract: A child needs contact with both parents to be able to live normally and develop properly. This contact is ensured when the parents are living together. In the event that the parents are separated, and in the event of disagreement as to maintaining contact with the child, the contact is determined by the courts. Sometimes, however, in order to enforce this contact, it is necessary to threaten or impose a financial sanction. The question arises whether such forced contact with the child fulfils its role and serves the child’s well-being.

Keywords: contact with a child, enforcement of contact, enforcement proceedings, role of financial sanctions, welfare of a child

Abstract: One of the main challenges which legal science faces nowadays is the creation of legal mechanisms guaranteeing sound public finance. The aim of this article is to assess the role of national fiscal rules in maintaining financial stability. Firstly, to fulfil this aim, the role of fiscal rules and their efficiency was analysed. Next, based on the commonly used tool assessing the quality of national fiscal rules – the Fiscal Rule Index – the quality of expenditure rules in the EU countries was analysed in order to evaluate the Polish stabilising expenditure rule and the escape clause of its application. Therefore, the following research question is to be answered: whether in the face of an unstable financial situation of the state connected with an increasing deficit, deviation from the stabilising expenditure rule should be considered as being right. Research methods based on non-reactive research, i.e., analysis of professional literature, legal acts, and statistical data published by the European Commission, were used in this article. Due to this analysis, it was indicated that expenditure rules are regarded as one of the most effective tools to manage public funds, and therefore any derogations from the application of these rules should be evaluated negatively. 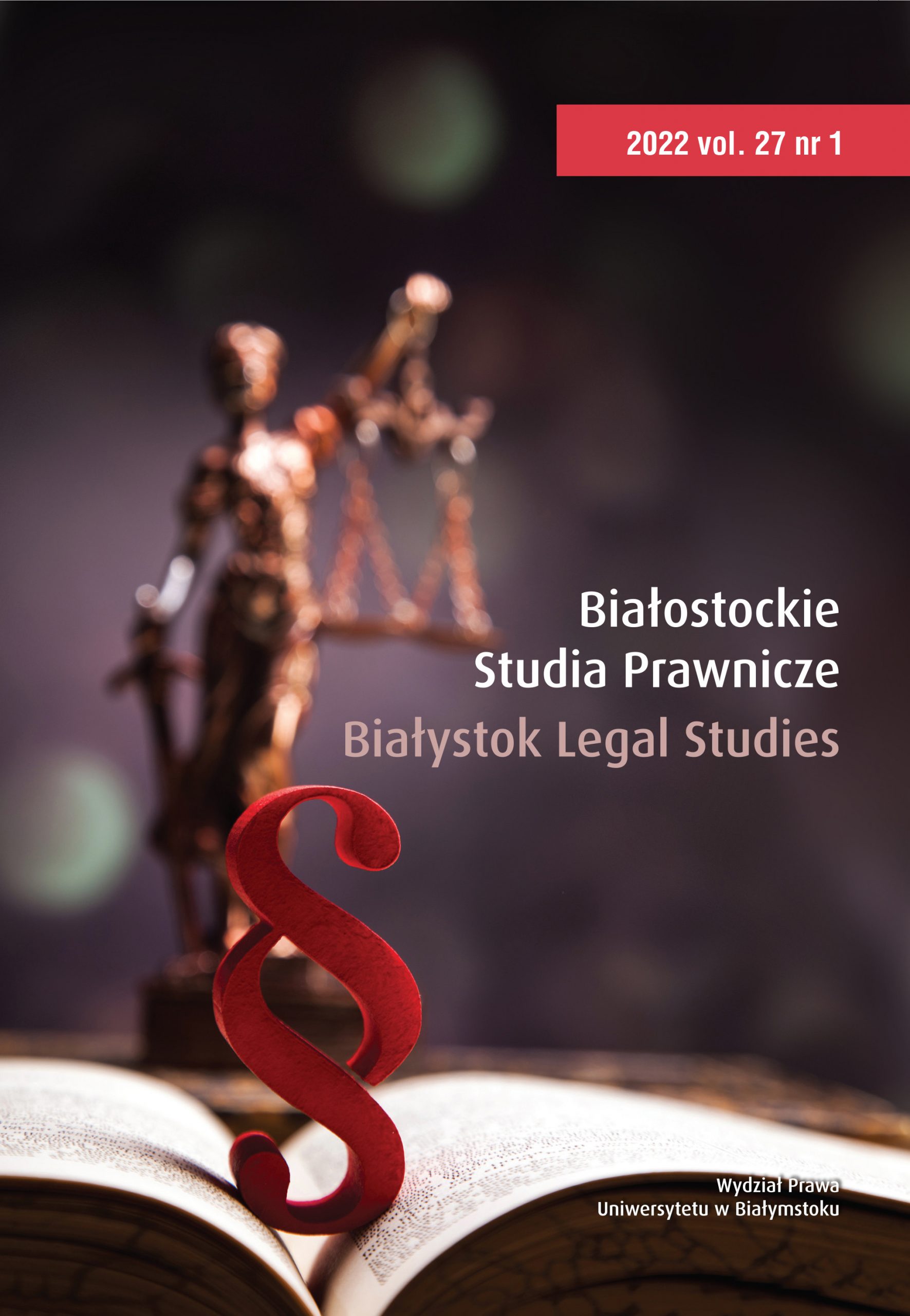