Charles F. Szymanski
The Idea of the “General Clause” in American Labor Law

Abstract: European legal systems have long encompassed the concept of the “general clause”, particularly in contract and labor law. The general clause includes unwritten legal norms such as good faith and public morality, and these principles are duly incorporated in the process of construing civil and labor contracts. While the general clause itself is formally absent in common law systems, its principles have found their way into modern British and American law. Two primary examples include the doctrines of good faith and unconscionability. In a broader sense, the idea of introducing rather indeterminate legal norms to be construed and interpreted by judges appears to be well-suited to a common law system. However, as applied to American labor law, the very indeterminacy of these terms has had rather negative effects on the rights of employees and the labor unions that represent them. Specifically, this article examines the good faith requirement in collective bargaining under the National Labor Relations Act (NLRA) and the doctrine of unconscionability in employment arbitration agreements, and concludes that they both should be supplemented by more definite standards in order to effectively protect employees.

Jana Komendová, Jan Horecký
The Notion of “Worker” for the Purpose of EU Social Policy and its Interpretation by the Court of Justice of the European Union

Abstract: Social policy is one of the EU policies shared by the EU and the Member States. The aims of EU rules in the field of social policy include protection of the working conditions of workers, on the one hand, and prevention of social dumping between undertakings from different Member States on the other hand. The EU primary and secondary law relating to social policy uses the term “worker.” However, contrary to the national laws of the Member States, there is no definition or explanation of this concept. National laws of Member States provide different definitions of the term “worker” or “employee” which can lead to different levels of protection for workers under the national legislations of EU Member States. For this reason, the concept of “worker” for the purpose of EU social policy may not be interpreted differently according to the law of Member States but has an autonomous meaning specific to EU law.

Abstract: This paper aims to present the issue of general clauses that define the scope of contractual freedom in settlements which have been concluded in disputes between the employee and the employer. The aspect of mutual concessions is also discussed. The violation of the problem of justified interest is considered. The paper shows that general clauses are not mutually exclusive, but usually overlap in a settlement. Therefore, a given settlement may violate various general clauses. The vagueness of their conceptual scopes sometimes generates significant practical problems worth to be observed.

Abstract: This paper deals with arguments defending the purpose of the existence of the provision of Section 318 of Act No. 262/2006 Coll., Labor Code. Both the arguments of legal scholarship and arguments expressed in the explanatory memorandum to the Acts in question are analyzed. This text further presents arguments in favor of repealing this provision which prohibits the performance of dependent work between spouses (registered partners). We base our arguments on international and European Union legal sources, in particular on anti-discrimination legislation prohibiting discrimination on the basis of marital status. In the context of Czech law, the relationship between the provision of Section 318 of the Labor Code and constitutional standards and other statutory norms is described and analyzed. A specific regulation contained in Act No. 234/2014 Coll., Civil Service Act is also presented and considered. The authors point out the absence of similar legislation in legal orders of other Member States of the European Union. In conclusion, the authors express and defend their legal opinion on the obsolescence of the discussed provision of the Labor Code and present suggestions de lege ferenda.

Keywords: marriage in the Labor Code, obsolescence of the provisions of Section 318 of the Labor Code, prohibition on employment between spouses and registered partners, proposals de lege ferenda

Abstract: The present text focuses on selected issues with regards to the private law principle of the autonomy of will and its manifestations within the area of labor law. More precisely, its limitations are analysed in the event of concluding an employment law relationship for a fixed term. The major restriction in the given context is seen in the requirement of one of the contracting parties to be procedurally active (while performing the respective juridical act) so that the anticipated legal consequences could be achieved. Firstly, the following paragraphs briefly deal with the general position of Czech labor law within the national regulation, in order to introduce the relevant legal context. Secondly, the main scope of the text represents limited analysis of a current fixed-term employment law relationship regulation from both the national (Czech) and supranational (EU) perspectives. Most importantly, the respective provisions arising out of applicable laws on the domestic level (the Czech Labor Code) have been confronted with those existing on the EU level (Directive 99/70/EC). Therefore, the desirable accordance of the former with the latter could be proven. As far as no less significant practical aspects are concerned, the final part points out actual challenges related to presupposed legal conversion of a fixed-term employment law relationship (based on the concluded employment contract) into an indefinite one. In the light of recent case law which will be mentioned, the conditions as prescribed in the Czech Labor Code are not interpreted unanimously, which naturally affects its application in practice in a more negative manner.

Abstract: The author of this article tries to summarize and provide knowledge about good manners, and places them in the context of labor law in the Slovak Republic. Good manners serve as a criterion that restricts subjective rights in their content, or often as a criterion that limits the exercise of subjective rights. They represent a positive limit to the exercise of rights and obligations arising from employment relationships. The term “good manners” is not defined in law, but we encounter this corrective directly within the basic principles in Art. 2 of the Labor Code. The negative limit on the exercise of subjective rights and obligations arising from employment relationships is the prohibition on abusing these rights to the detriment of the other party to the employment relationship or co-employees. According to the provisions on the invalidity of legal acts, the subject’s conduct contrary to good manners and abuses of rights are subject to absolute invalidity. The prohibition on the abuse of rights is a legal norm, the violation of which by an authorized subject is an illegal act.

Abstract: This work is focused on aspects of the general clauses used by the legislator in the Act on Collective Redundancies of 2003, i.e. reasons not attributable to an employee and their exclusivity. The first clause covers all cases of termination of an employment relationship that are caused by circumstances affecting the employer or independent of the parties to the employment relationship. On the other hand, “exclusivity” of the reasons not attributable to an employee is confirmed if circumstances not attributable to the employee and the way of performing employment relationship duties thereby constitute the original cause of a definite termination or a notice of change. Analysing the scope of application of the said indeterminate phrases, the author also refers to the principles of community life.

Keywords: exclusivity of reasons, principles of community life, reasons not attributable to an employee

Abstract: The subject of the article is the assessment of the legal situation of employees with whom an employment relationship has been established on the basis of appointment in selected local government units. In particular, the considerations apply to people employed in council offices (poviat starosty), marshals’ offices and local government cultural institutions. The legal situation of the above-mentioned persons is shaped by specific and common provisions. According to the author of the article, the tendency of the legislator not to take into account the code-based employment relationship model when creating a special regulation is more and more clearly visible.

Abstract: The current wording of Art. 251 § 4 point 4 of the Labor Code, valid since 22.02.2016, is an example of a general clause in labor law. At the same time, the “objective reasons” of the so-called “unlimited” fixed-term contracts entered into belong to the clauses that change their meaning depending on the person who applies an established rule of law. The use of “objective reasons on the part of the employer” on purpose to limit the abuse of “temporary employment” should generally be assessed as incorrect. According to this, the Court of Justice of the European Union may judge this regulation to be illegal according to Clause 5 of Council Directive 99/70 / EC of 28 June 1999, and as incompatible with the purpose and the effectiveness of the framework agreement. Therefore, it is necessary to replace the general clause used by the legislator with further, more specific premises of “objective reasons” for entering into “unlimited” fixed-term employment contracts.

Abstract: This essay concerns analysis of specified provisions of the Labor Code and international acts regarding annual leave, as well as the case law of the Supreme Court and the decisions of the CJEU, in order to address the following question: With regard to an employee employed in Poland, with whom the employer unjustifiably terminated the employment contract, and whom the Labor Court reinstated under previous conditions upon the employee’s request, should the time from the termination of the employment contract to the employee’s reinstatement under the previous conditions be included in the seniority for which the employee is entitled to vacation leave? The conclusion is that, in accordance with the adopted jurisprudence of the Supreme Court, the periods of unemployment due to unlawful termination of an employment contract, from the date of the termination of employment to the date of undertaking work after reinstatement, do not affect the right to vacation leave. A different opinion arises from the CJEU decision discussed here. It should be emphasized that the rule expressed by the CJEU is not applied under Polish labor law.

Keywords: reinstatement of the employee to work under previous conditions, the right to vacation leave

Abstract: This article analyses the notion of disability in Polish and EU labor law. In the first part of the study, the author characterizes the evolution of this notion based on the interpretation made by the Court of Justice of the European Union. The second part presents the process of development of the definition of disability in Polish law: from disability to the concept contained in the Act on Social and Vocational Rehabilitation and Employment of Persons with Disabilities, and the vocational rehabilitation and employment of disabled people. 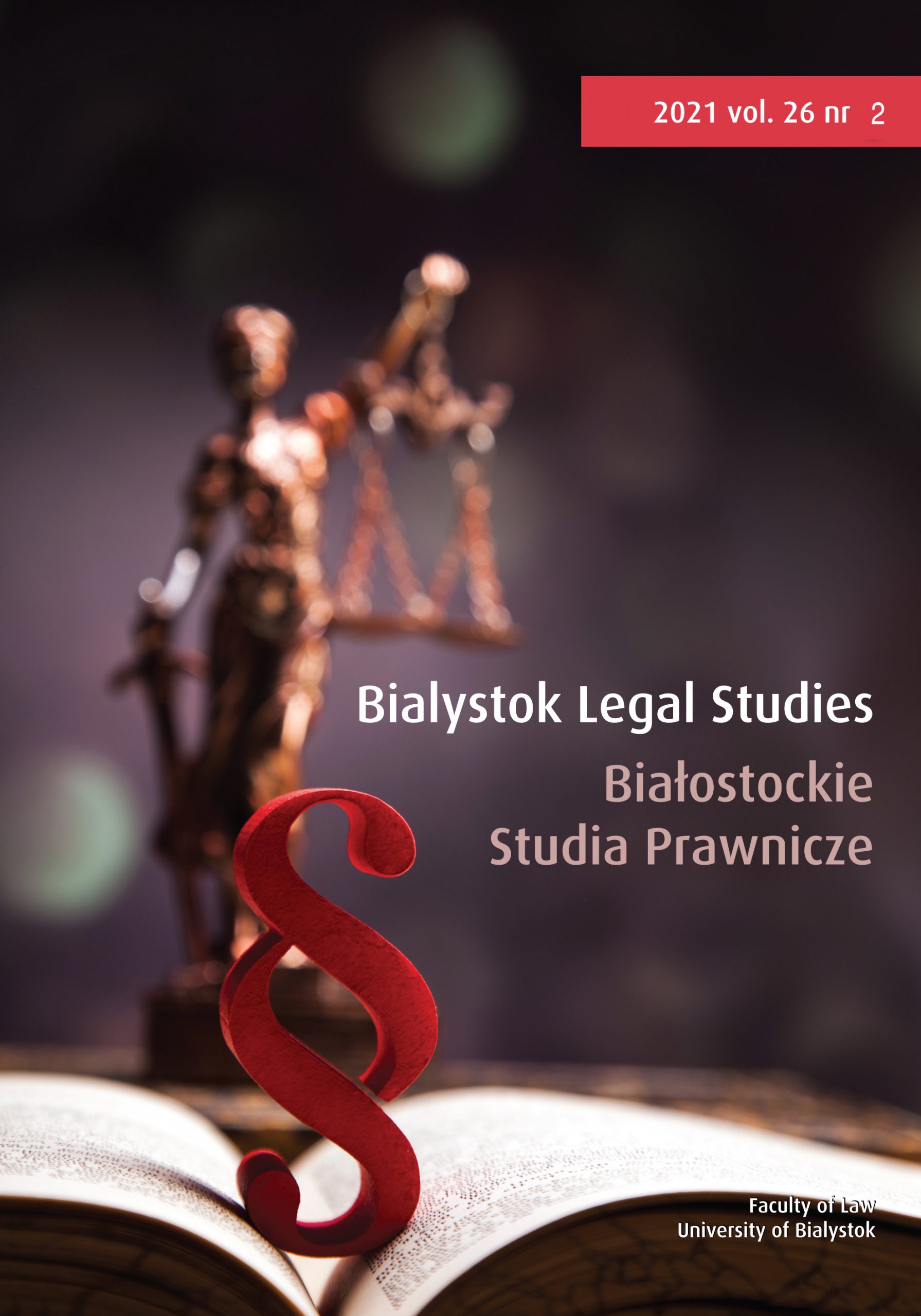