Abstract: The presented study raises the issue of the admissibility of employing academic teachers on a basis other than an employment relationship, in particular based on one of the named civil law contracts, which is a contract for specific work. The author made the determination whether, due to the type of actual activities performed by the academic teacher, including in particular didactic classes, it is permissible to perform these activities on the basis of a result contract characterized by the need to specify the result that should be obtained by the academic teacher. The author’s considerations lead to the conclusion that the legislator allows the possibility of employing academic teachers on the basis of civil law contracts, including contracts for specific work; however, it should be remembered that in each case, before establishing a given legal relationship, the parties should first consider whether the specificity of the contract and the work will correspond to the actual content of the legal relationship between the university and the academic teacher. This is to avoid the situation where the academic teacher later questions that the contracting parties are not actually a work contract but, for example, an employment contract.

Abstract: Polish tax law contains favourable regulations on the income obtained from the use of copyrights. An employee, for example, an academic teacher, can also take advantage of these preferential conditions if s/he performs creative activities as part of her/his professional duties.

The preferential settlement of the payroll tax on the employment of an academic teacher raises doubts from the point of view of tax authorities. What is problematic is how to determine the scale of creative work and the amount of remuneration strictly for this type of work. In the new Law on Higher Education and Science, the legislator intends to resolve these doubts by assuming that performing teaching duties is a creative activity. Consequently, all remuneration is due for the work of the creator and is taxed more favourably.

In this text, the author makes a critical analysis of the legal fiction contained in Article 116 section 7 of the Law on Higher Education and Science. The author assesses the effectiveness of legal regulations in achieving the purpose of the Law – resolving doubts concerning preferential taxation of remuneration for the work of an academic teacher.

Abstract: Pursuant to the Act on higher education and science, PhD students are educated at a doctoral school. The PhD student  prepares a dissertation under the supervision of a supervisor (sometimes also an auxiliary supervisor) leading his scientific path based on the training program and individual research plan. The research work of the doctoral student remains independent as it was in the previous legal reality. However, the degree of PhD students` impact on the research path is much greater. A PhD student remains part of the institutionalized system, in which he has to perform certain duties and through which he is evaluated for the progress of his research. The PhD students` dependence is also related to non-legal factors – individual personnel relations. The presented text covers the situation of the doctoral student on all the above mentioned criteria creating a coherent picture of his (in)dependence in shaping the research route.

Abstract: Financial law is a separate, autonomous and interdisciplinary field of law that has evolved from administrative law. The subject of this area of law are primarily public finances based on a number of principles and institutions that have the right to perform public financial operations. The catalogue of public values under financial law is, however, open because the law is constructed in terms of certain values and their protection. It should be emphasized that the law indicates the proper system of values, in which human dignity and freedom are the most important. These values are the source of all rights, including financial law. The subject of axiology is the relationship between these values and the legal normative system. The purpose of this article is to apply broadly understood general and academic financial law, in the theoretical aspect and terms of functions and details. In the case of financial law, axiology focuses mainly on the essence and public values contained in financial law, while it can be considered that the catalogue of public values under financial law is open.

Abstract: Providing mutual financial aid and aid in kind by entities of the local self-government sector (local self-government units, their unions and associations) are conceptually related to the legal institution of cooperation in the sector. This work includes the analysis and evaluation of legal regulations, doctrine and judicial practice in scope of this least institutionalized form of cooperation. It has been determined that an entity providing such aid freely decides on its form and value, but in case of providing the aid it is obliged to follow the rules and mode defined by legislators. In the resolution the decision making body of the entity providing the aid in general defines the aid value and the task for which the aid is to be dedicated. The decisions shall be specified in the agreement signed between executive organs, the aid granting and the aid receiving entities respectively. The act reserves that the financial aid may only be in a form of a designated subsidy from the budget. The aid in kind may have more universal forms, e.g. transfer of a specific thing, performance of work or services. The provision of aid is a specific form of cooperation in the local self-government sector, and simultaneously it has a crucial impact on the protection and conservation of fundamental values giving base for the concept and functioning of self-government unions, such as: self-reliance, subsidiarity, decentralization, sense of solidarity with other self-government unions, responsibility and  the formation of partner relations acting in common interest.

Abstract: The assumptions of the fiscal policy, established and implemented by the organs of the National Bank of Poland, constitute a set of goals of a macroeconomic nature and instruments of their implementation. This work includes an analysis of valid legislation in order to determine the legal nature of the document and its importance for the protection of the constitutional value, which is the monetary regime of the Republic of Poland. The general findings included in the document are supplemented with the issued by the NBP implementing resolutions specifying the rules and mode of applying individual instruments of the fiscal policy. In scope of the formation of the fiscal policy assumptions the legislator assigns the main role to the Monetary Policy Council which is an organ of the NBP. The document is a crucial theme of the cooperation between the organs of the NBP and between the organs and State organs (Sejm, the Council of Ministers and the Minister of Finance). The basic goal of the cooperation is active protection of the public value in the form of the monetary regime and in a broad prospect to obtain financial stability of the State. The assumptions of the fiscal policy integrate the most important organs of the State in their actions for such a monetary regime that should ensure the proper value of money, planning predictability and rationality of decisions in economic matters, protection of real value of savings of the entrepreneurs and households as well as proper operation of the market.

Abstract: The main objective of this article is to present an overall insight into the legal aspects related to public financing of a sport infrastructure in Poland. The research strives to draw attention to the importance of public financing in the sports sector and also to ensure a small breakthrough in the administrative process of granting and applying for state aid funds. The author highlights the possible negative implications of mistakes in the state aid scheme, in particular connected with the potential recovery of incompatible aid. The article includes theoretical and practical issues related to the rules of state aid in sports sector. The research is intended to propose an interpretation and application of the current state aid law in light with CJEU jurisdiction and the Commission’s decision-making practices. In the opinion of the researcher the final implications contribute to the better protection of the joint interest of Polish sports clubs and public authorities and to minimalization of the potential risk of EU sanctions.

Abstract: The paper indicates the need to change and modify the definition of „administrative agreement” as a legal form of administration’s activity, constructed still in the legal system of the People’s Republic of Poland and limited by its political conditions and the then organizational structure of public authority. This definition has been functioning until now in administration science textbooks, despite the system changes and new challenges facing public administration connected, among others, with the implementation of EU funds, where this legal form of administration activity plays a particularly important role in the system of distribution of structural and cohesion funds on the territory of the Republic of Poland. This change in the doctrinal definition of an administrative agreement would consist in the fact that, while retaining its other elements, the change would concern the status of entities concluding agreements in regards to their „independence”. The current definition allows for the possibility of concluding such an agreement only with entities independent of each other, not being in the administrative subordination structure. On the other hand, the current legal regulations allow for the possibility of concluding such an agreement between entities that are dependent on each other, whether structurally, functionally or politically, though, for example, the possibility of filling managerial positions by a superior entity in an entity that is a party to such an administrative agreement.

Tinatin Zhorzholiani
Assessment of Corruption’s Impact on the Inﬂow of Foreign Direct Investment (in the Case of Georgia, Armenia and Azerbaijan)

Abstract: The aim of this paper is to investigate the impact of corruption on the inflow of foreign direct investment (FDI) in Georgia, Armenia and Azerbaijan, from 2012 to 2018. The study attempts to answer the question: “What effect does corruption have upon the level of foreign direct investment inflow to a country?”  Using the data from UNCTAD for foreign direct investment and Corruption Perception Index from Transparency International, for a period of 7 years, 2012-2018, we evaluated the specific impact of corruptions on FDI using GDP as control variable. A regression model was developed to establish the relationship between FDI and Corruption Perception Index. Co-integrating Regression analysis was carried out using relevant econometric techniques. The model is based on a theoretical approach found in academic literature This exploratory paper results confirm the majority of literature and show a negative significant relation between the variables analysed but at a lower intensity than expected.

Sławomir Redo
Halina Święczkowska, Language as the Mirror of World Order. On the 370th Anniversary of the Birth of G. W. Leibniz and 300th Anniversary of his Death, Wydawnictwo Uniwersytetu w Białymstoku, Białystok 2016, pp. 152 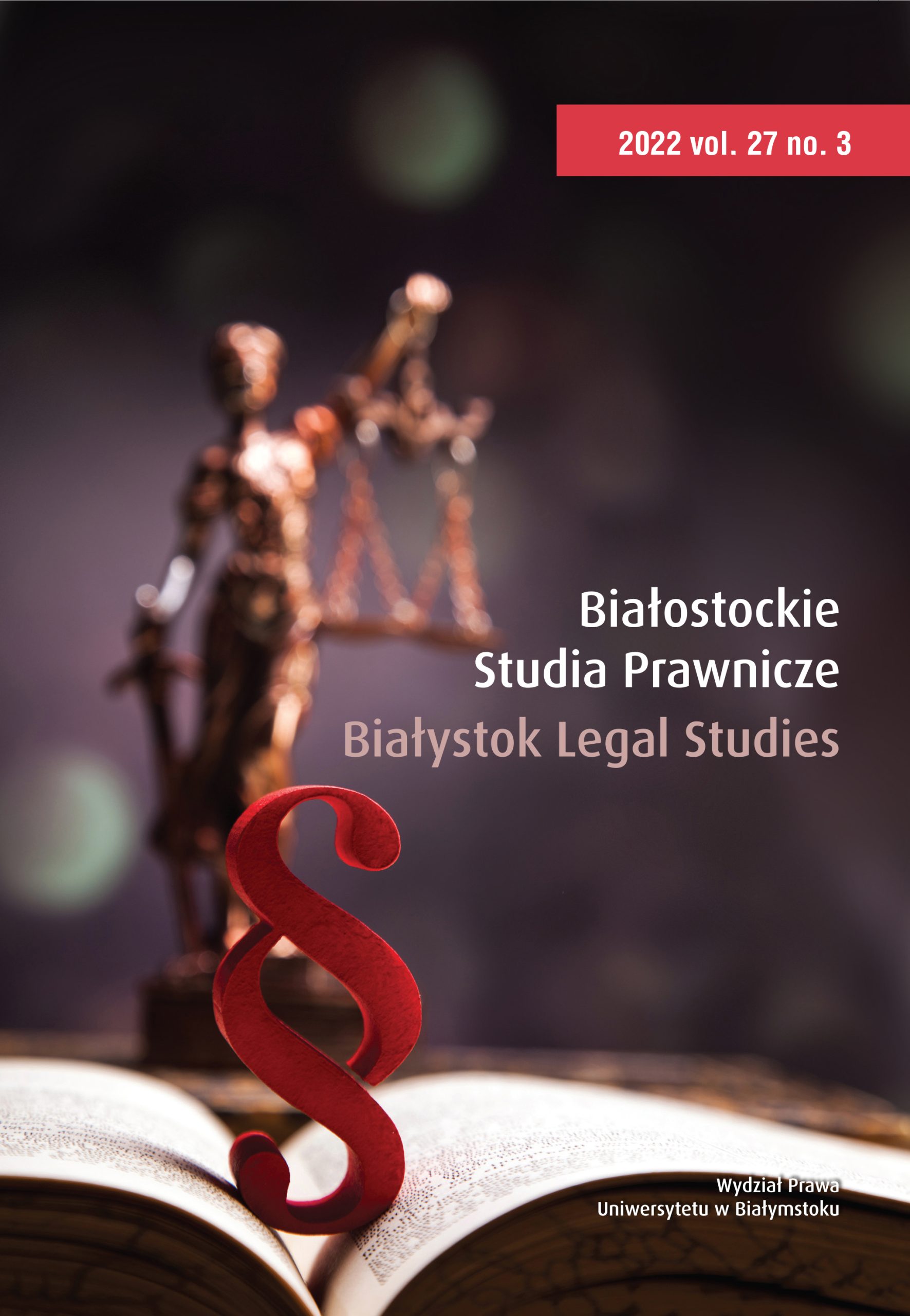